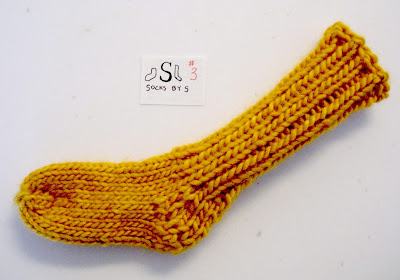 This sock is for Aaron.  I used metal #6 circular needles in magic loop mode with The Fibre Company’s Organik (70% merino, 15% baby alpaca, 15% silk), which recommends #8 needles.  This produced a nice tight stockinette pattern.

It went fairly smoothly for a new project.  I had to learn Judy’s Magic cast-on, and I’m still a bit shaky on my M1R and M1L (it’s all a blur of picking up legs forwards or backwards, knitting through the back or the front or backwards through the front or something) as evidenced by a few holes in one ankle but not the other.  The sock pictured is the second try; when the pattern calls for casting on 10, that’s ten total, not ten per needle.  I’ll get more practice because Aaron has already outgrown the newborn pattern; this sock only went as far as his ankle.  So I’ll have to remake it (and make its mate) one size up, and now I have one extra sock suitable for any newborn named Aaron.

Hardly anybody seems to love the pun1 as much as I do.