I took aufrecht.org down a few years ago because I was paying too much to host it, it was running on a niche technology called OpenACS, and I didn’t have free the months I feared it would take to move it, upgrade it, port it, etc.  So I turned it into a read-only archive, at least for a while.  But for a year or more it’s just been one page; that says it’s “paused”.

And before I could get it back up, I knew I wanted to invest a lot of time in doing it properly. Hosting your own website is very time-consuming when you can just use Blogger or any of dozens (probably thousands) of hosted systems. I do it as something between a personal hobby and professional homework; as a technical project manager working mostly with web applications, I want to know enough to be able to ask misguided and partially informed questions at work. OpenACS introduced me to technical concepts of automation of testing, deployment, configuration management, application version control, and so forth that still seem to be bleeding-edge questions a decade later, and I want to master some other platforms to see if anybody’s caught up.

You can’t just read about this stuff. You have to smash your face into electronic brick walls over and over again to really learn. If I hadn’t had to manually, file by file, fix the results of OpenACS release branch merging, I wouldn’t really understand what it means to say that branching is to merging as backup is to recovery: the first is easy but the second very hard, and without the second one, the first one is worthless. Before I could recover all of my old data, I would to set up a new website to put it in. Before I could set up a new website, I would need to learn a new web platform. Before I could learn a new web platform, I would need to understand distributed version control.

And before I could do all that I needed a new desk. 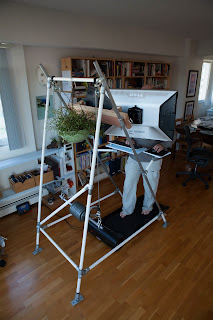 Calvin and Peter got me started with standing desks, and now I was ready to try a walking desk.  And I didn’t want to buy one; I wanted to make one. I wanted a craft project, and I wanted to make something vaguely artistic. It ended up taking several months to finish, and it’s the kind of project that’s never actually going to be completely finished, but today I’m ready to show it off, and in some followup posts I’ll go into more detail about how it works (and what doesn’t work), how much it costs compared to a commercial walking desk, how to make it yourself, and whether or not you should try.

Without further ado, other than to thank David Gartner for his fine photography, I give you the world’s first sit/stand/walk/flowerpot desk.

(All posts about the Sit/Stand/Walk/Flowerpot Desk Index)