I realized that I was never putting the Sit/Stand/Walk/Flowerpot desk into Sit mode. Since the sliding bar can be locked into place by tightening the set screws, I didn’t need the counterweight or its clearance, which freed up a lot of space within the desk.  So I moved the free-standing computer stack, which is an elfa mesh shelf stack on wheels, inside the desk behind the treadmill. Also, I could mount more things to the poles since I wasn’t going to move the mouse and keyboard much. Hence, a flurry of additions.

First, a plywood box to hold my laptop at a good angle to be visible while standing.  As a bonus, a mount for the phone as well: 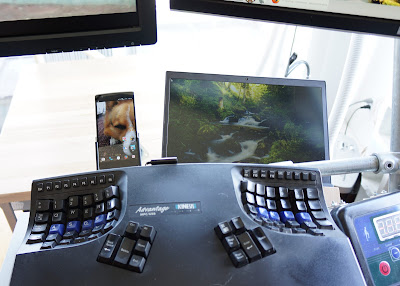 A little messy from the side.  The phone is in a ProClip mount, bolted to a Panavise arm which is screwed to the back of the plywood box for the laptop. 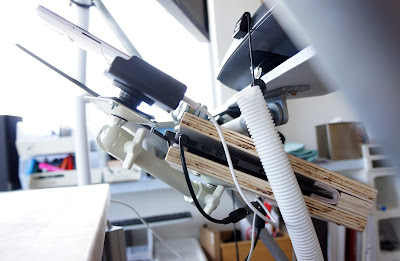 The plywood box (which is two sheets of plywood screwed to a thin strip, with no sides) is screwed to a Kee Klamp M58 Base Plate, which in turn is bolted, with locking washers sandwiched in there, to one flange of an F50 Female Single Swivel Socket, though I now realize a MH50 or M50 would have been simpler, since the second flange is useless for this application and makes it a bit trickier to assemble.  The whole thing goes onto a short piece of pipe, which then mounts to an A10 Single Socket Tee on one of the front pipes.

I also put up another small shelf, similar to the mouse pad and using a similar combination of Kee Klamps, on the opposite side of the keyboard from the mouse pad. 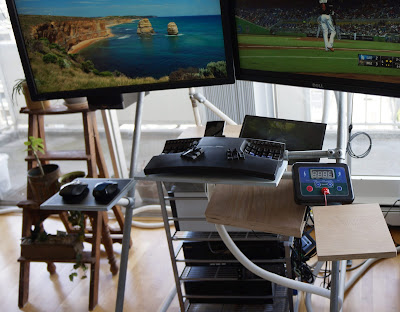 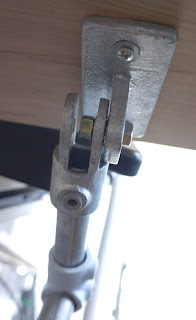 While the right speaker sits on a nearby shelf by the wall, the left speaker was hanging out on top of the computer shelf stack, eating up tabletop.  I suspended it from another pole: 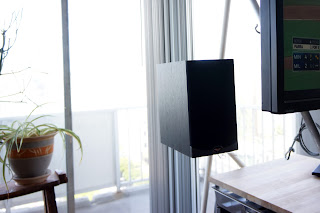 The speaker had a mounting screw hole at the top, but that's intended to hold the speaker against a wall.  Without a flat surface behind it, the speaker wouldn't hang properly.  A strip of plywood screwed to a Kee Klamp 70-5 Rail Support fixed that.  It also got me wondering why I didn't use the 70-5 instead of the M58 + M50 combo for the four other places with plywood (keyboard tray, mouse tray, laptop box, and shelf).  There is actually a reason: the front poles are sloped around thirty degrees, and the trays need to be positioned and level at arbitrary locations in space to line up with the ends of my arms, whereas the rear pole that the speaker is attached to is almost vertical and the speaker simply has to hang in space. 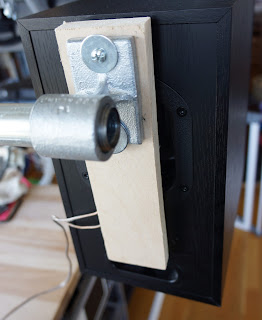 I'm going to try to go a few months without adding anything else.  Oh, and I gave away the flowerpot, since the muehlenbeckia was barely hanging in there, possibly due to the northern exposure.