This is Part 1 of a series about the Sit/Stand/Walk/Flowerpot desk, why I built it.  To find out how I built it, see Part 2.  To see its shortcomings, see Part 3.

One nice thing about human health is that the human body is so complicated that, when everybody has a contradictory opinion about a health issue, they can all be right, and they can even all have contradictory scientific research backing them up.  I think this paradox is also one of the pillars of the self-help industry. 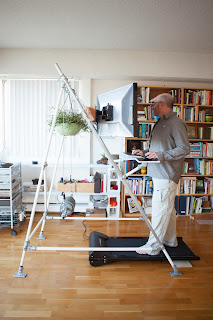 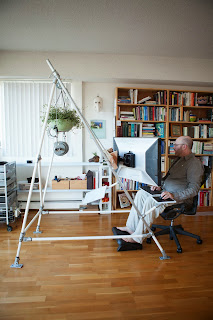 So, there’s a growing body of evidence and anecdote that sitting in a chair all day is not healthy.  Here’s a 2012 New York Times article, but I learned about in 2003 with Calvin and Peter at Collaboraid in Copenhagen, when standing desks, along with centuries-old refurbished office buildings and high-intensity lights to stave off SAD was all part of what the cool kids did.  I never made the jump to a $1000 motorized sit-stand desk (if you want to, see this excellent summary of the options and details), but for most of the last ten years I’ve used some kind of IKEA shelving arrangement that made it possible to manually heave my monitors to higher and lower shelves.  I can’t point to any particular health benefit, and often I get pretty tired of standing all day, but I’m still alive, so maybe it helped?


Anyway, there’s now plenty of argument that standing all day is bad for you; and/or that standing doesn’t offer much health benefit over sitting, that it’s movement that offers health benefits.  So now there’s a big market for treadmill desks.  This one is $1500; these fancier ones start at $2100.  I decided that I wanted to make one myself.  Here are my requirements:

All of this was percolating in my head for the last year or so, leading to these design considerations:

I didn't find any simple motorized solutions like a lego-style module and didn't want to build anything that complicated from scratch.  I suspected a cranked mechanism might also be extremely complicated.  So I was leaning toward a counter-balanced weight that slides up and down.

If I was going to use a counter-balanced weight, I wanted it to be a flowerpot, so I would have sit/stand/walk/flowerpot functionality.

I rejected a wooden frame as too bulky.  I was leaning toward plumbing pipe, and I made an end table as a trial run.  It was a simple grid structure, all right angles, with diagonal wires to make it rigid.  It was fairly hard to make it rigid with diagonal wires, and depended on having very tight connections between the pipes and the shelf surfaces.  It ended up costing around $200, which is what a table of roughly similar size and materials seems to cost (and at least $100 more than seems reasonable).  I also learned that standard steel plumbing pipes are pretty strong, but that the threaded connectors are a real pain, since to get a complete loop (e.g., a square or triangle, you have to have some reverse threading.  That and a tip from Fram put me in the direction of Kee Klamp connectors, which are basically giant tinker toy connectors.  I also considered Unistrut, but it seemed too bulky and didn't have the same look as the pipes. 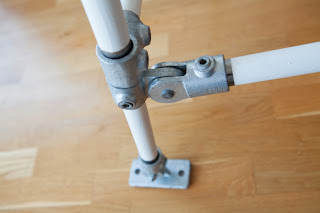 From the table experience, I knew that I didn't want to mess with tension wires, and so I wanted to try and build as many triangles as possible into the shape for rigidity (a kind of space frame design), with a poor second choice being rectangles braced with diagonal bars.  Also, the Kee Klamps are very expensive so minimizing them would be ideal.  So, I ended up pretty quickly with the basic design of a pulley and swingset: two A-frame sides, connected by straight bars, with the monitors sliding up and down one side and a counter-weight hanging down from the middle. Since the feet can't get attached to the ground, extra bracing is required to keep the legs from spreading.


Here's what I came up with: 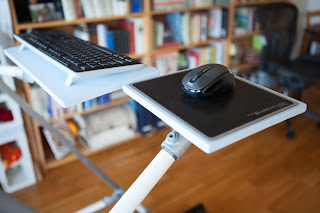 The monitors are attached to simple (i.e., cheap) arms which are mounted on a wooden 2"x6" board.  The board hangs from Kee Klamps which slide up and down the front pipes, aided by some teflon.  The monitors are counter-weighted by regular lead weights—the flowerpot hangs independently—and can be moved up and down with a bit of muscle.  The keyboard and monitor are on independent arms, which are manually loosed with a hex key and moved up and down as needed.  The treadmill is manually pushed forward out of the way for sitting mode.  The overall transition between modes takes several manual steps, less than a minute in total but only after practice.

Altogether, the parts totaled about $1300, and I'll go into more detail in a future post.  I'm satisfied with the design and use it every day, but there are things that aren't perfect and different paths I might take with a second try.  Would I recommend this approach to others?  Only if you like this particular design more than a commercial solution, are willing to spend just as much, and have weeks or months and some space to play around with it.

(All posts about the Sit/Stand/Walk/Flowerpot Desk Index)